Top 10 Beer Festivals In The World

Walk into any bar and you are sure to find friends having fun as they sip on tall chilled mugs of beer. Millions of beer lovers head to the annual beer festivals around the world. There are numerous such festivals being celebrated in different parts of the world, through the year. A list of the best and the biggest beer drinking parties has been curated here for you. Head to one of these festivals to simply enjoy the magnetism of the place and also do make sure you try some unique flavours of beers offered. 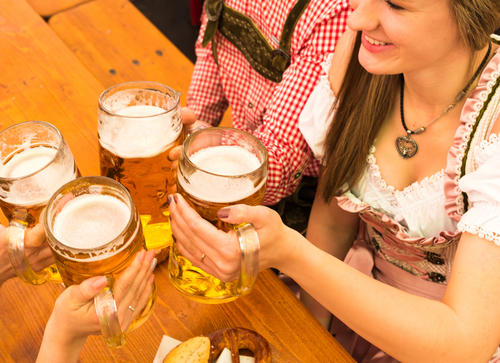 Oktoberfest is the biggest beer festival in the world celebrated since 1810 in the town of Munich. Over 6 million beer-loving people rush to Germany every year and consume almost 6.9 million liters of beer. This German beer festival is known for its traditional Bavarian costumes and delicious German food. The city hosts 14 themed beer halls, parades, carnival rides and sumptuous eats. Oktoberfest has gained so much popularity that Germans across the globe celebrate their own Oktoberfest in countries such as Vietnam, Brazil and Hong Kong. The Oktoberfest start in late September and goes on until early October.

This festival is considered to the second largest beer drinking event in the world after the Oktoberfest at Munich. The ConstatterVolksfest takes place in Stuttgart from the last week of September until the first week of October. This two week-long festival was originally an autumn fair which later started being referred to as a beer festival by the locals. This festival hosts joyous attractions such as oompah bands, world’s largest portable ferriswheel and the 26 meter high column covered in fruit.

Also known as the ‘Biggest pub in the World’, Great British Beer Festival is organized by Campaign for Real Ale which conducts many other beer festivals in the country. This London based festival can be enjoy in the first few days of the month of August every year. The festival is hosted at the massive Olympia Grand and Olympia National and is attended by 60000 beer lovers from the world over. The beer festival features live entertainment, pub games and beers from over 100 breweries. It is estimated that one pint is sold every half second during the course of this festival.

This three days long annual festival hosts over 2000 varieties of beers from 450 American breweries. Competitions are held here as well in which 100 judges from the United States evaluate over 3000 beers. It is then that the President of Brewers Association, Charlie Papazian announces the winners of brewpubs and breweries of the year. Guinness Book of World Records states that this festival is the largest venue in the world for varieties in draft beer. Rush to Denver, Colorado in the month of September to enjoy this annual festival.

This festival based on quality and distinctiveness, can be attended only by those who are lucky enough to receive invites. This festival takes place in the charming city of Vermont during the summer month of July. Being held on the waterfront of Lake Champlain and with the backdrop of the Adirondack Mountains, this festival is every beer lover’s dream. Vermont is home to innumerable breweries and each of them being better than the previous. No wonder that the longest running outdoor brewers festival is located here. The informative sessions held during the festival can give you an insight into theprocess of brewing your favourite beer. This festival is a great place to try barleywines and unique fruit beers.

If you are fortunate enough to visit Montreal in the month of June, you can witness the Mondial de la Biere. This is Canada’s largest beer festival which houses beers from breweries from all over the world. This festival is hosted in the largest auditorium in Montreal and features over 600 beers. 100,000 beer lovers visit this fun-filled event every year. The highlight of this festival is surely the local beer school which conducts workshops and guides visitors on beer making.

This festival is organized by the Knighthood of the Brewer’ Mash Staff and the Belgian Brewers in early September every year. The Knighthood is a contemporary incarnation of centuries-old beer maker association. The festival of Brussels offers a picturesque setup with the Grand Place being occupied by rows of numerous taprooms and pubs. Over 225 varieties of beers are offered at stands operated by the beer brewers themselves.

This four daylong event is the nation’s longest-running craft beer festival and is hosted by the lovely city of Portland. 80 breweries from all over the United States take part and also brew special beers specifically for this event. You can try a unique selection of beers such as the watermelon beer. This event takes place in the second half of July with its prime focus being on craft beers.

This festival celebrated in Maitland, Australia houses over 50 craft beers from all around the globe. The highlight of this festival is the unique setup which is created inside an ex-maximum security jail. The festival hosts musical acts and also the, 'best prison food you’ll find'. Make sure you plan your trip to Australia during the month of November to enjoy this one-of-a-kind beer festival.

Also termed as Asia’s largest beer festival, Quindao International Beer Festival runs a month long and hosts numerous beer drinking parties. This beer festival is hosted by the Quindao town in the month of August.It features over 200 varieties of beers brewed by Chinese brewmasters and international brewers. During the course of the festival, hundreds of events can be enjoyed such as parades, bikini contests and carnival events. However, the opening and closing ceremonies are cheered with maximum fanfare and opulence.

Planning to visit anywhere in the World, We partner with many Airlines to help you find Cheapest Flights. you can also give you free quote for flights by email or by calling our toll free number 1 (855) 722-9977.